Suntec City mall has become one of our favourite malls these days because of the proximity to where we live and the complete facilities and areas to what we are looking for in a mall. We were looking to find a restaurant that were near the playground where we were planning to bring our kid, and managed to stomp by this korean restaurant which looks interesting. 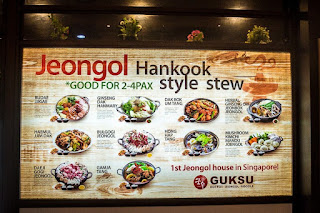 The food selection was rather interesting and so we chose a hotpot bowl to share for 2 person, along with with a very delicious looking famous Korean chicken which I requested for them to mix between the soya and spicy. 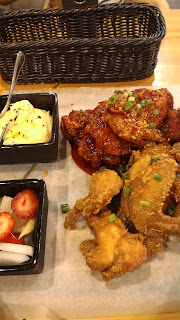 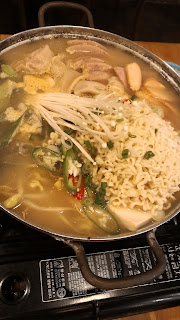 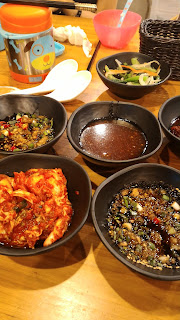 Side dishes were also available and diners can take as much as they want themselves. There were not many selections other than a few vegetables and kimchi but it was okay.

When the main dishes came, we quickly fed to the hotpot ourselves to try. It came out that the portion was big enough to share for even 3 person and the taste were rather not bad as compared to the other hotpot I have eaten at other korean restaurant. We were also being served a white rice for two even though the hotpot already have some noodles inside. It was so filling.

Next come the mix soya and spicy chicken which we ordered separately. The spicy chicken was a tad too spicy for me and I prefer the version by nene chicken and 4 fingers though the soya version was very good and comparable to the 4 fingers chicken I've previously classed as number one. In the end, we were too filling and couldn't have finished all the meals so we decide to pack the chicken home.

When I proceed to ask one of the waiter to take away the chicken, he mentioned that they would charge $1 for the takeaway. Even though the amount isn't significant, it's a little put off knowing that the restaurant can't even absorb the packaging cost. I've heard other similar reviews who were disappointed at this too so perhaps the management can consider next time.

Overall, we spent about $70 (including GST and Service Charge) for the two main dishes and I must be the first to say that it doesn't come cheap. Overall, I would give a rating of 7 out of 10 and there are other more affordable restaurants to choose from especially for dollar fussy eaters.
"Cool De Sac" Review
This is the second time we’ve been to Cool De Sac, an indoor playground for kids which is located on the 2nd floor of Suntec City near the Korean food we ate (more on it below). Suntec City mall has become one of our favourite malls these days because of the proximity to where we live and the complete facilities and areas to what we are looking for in a mall. 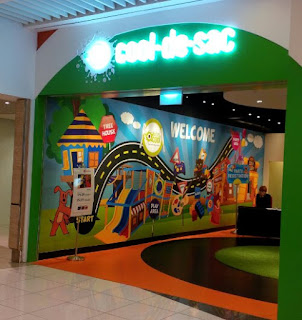 I actually like this more than Pollywogs because it has a wider range of facilities that segregate the different age of kids to play with. From the entrance, you can quickly see on the left that there is a jungle-alike areas where older kids can roam, run and climb around. If you are bringing younger kids to the area, do make sure that you watch them closely because there are lots of other kids around and they might clash when running into each other. That’s what happens to my son where he got knocked by older kids, leaving some bruises on his cheek. 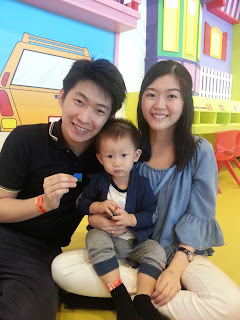 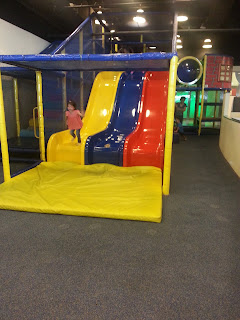 In the center of the areas, there are drawing and lego activities for kids who want to showcase their creativity. Baby O loved playing this at home, so it is natural that he go straight to the area the moment he spotted them. 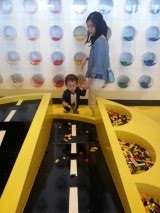 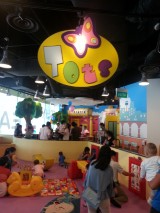 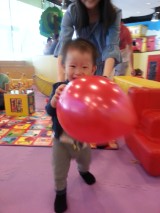 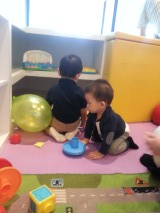 On the other end is the toddler’s area, where babies and smaller toddlers can roam and run around freely without fear of being knocked down by the bigger brothers and sisters. There are lots of toys to choose from and a small pool of ball areas where he can soak himself drowned with the balls. There’s a reason why kids love balls!!!
Overall, it was a fun session and the kid love the place. It is also very reasonably priced at $13 for the weekends and parents are allowed to come in for free. The only thing to take note is both parents and kids need to wear socks in order to get in otherwise you will have to purchase it onsite. Will definitely be back again next time to bring baby O socialise with the other kids.
Posted by B at 5:31 AM No comments:

My Purpose of Starting This Blog and About Me

This will be my first inception post on this newly created blog on the "Leisure With Daddy B" which will generally document our family journey towards spending quality time together. It will also cover a wide range of topics related to leisure such as food and product reviews, traveling, parenting, budgeting and many more which I enjoyed doing on a frequent basis.
The purpose of documenting this is to share the moments I treasure with the family on a different dimensional scale at each point in time. Looking at these from the future, I hope to bring inspiration to the families and readers out there and prove that happiness can be simple and achieved easily, albeit effort required to be done to pull everyone together out of the busy schedule. 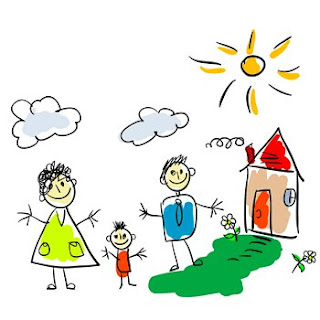 Some introduction about myself too. I am a happily married husband and a daddy to my son which I adore him very much. I worked as an Accountant for my profession but I've pretty much figured out the things I wanted to focus on in my life. I'm not talking about giving up my corporate role or financial ignorant altogether but rather have them sorted out early in my life so that I can enjoy the fruits of the labor for the rest of my life. Currently, I run a separate blog mainly on personal finance and investing at foreverfinancialfreedom.blogspot.com where I have been writing for more than 5 years now (and going) about achieving financial independence early in our lives. Should you be interested in such topics, you may want to refer to the blog where I often update things that are related to money management.
I hope to interact with a lot more bloggers and readers who share the same purpose in life with me. At the end of the day, it is about finding the right mix between joy and idle, and I hope this blog will contribute positively to those who needs them.
Posted by B at 5:58 AM No comments: