Pororo is a famous little Korean icon which has been popular amongst kids, particularly in Asia so when the news about the latest indoor playground Pororo Park opened in Marina Square Singapore, we can't wait to bring our little one there. 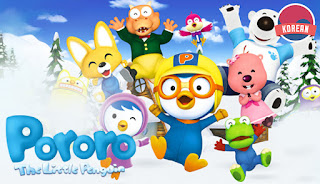 The indoor playground is huge, almost similar in size with Cool De Sac, which is located at next door Suntec. The place was overwhelming with crowd when we came and it could be because it was new and second it was during the weekend period and school holiday.

The first thing when we entered was to go to the middle of the park and there are spaces for younger kids to ride sort of a bicycle that can move around easily. It is almost similar to a skating ring practice where the parents can sit around the circle and watch the kids play leisurely.

After watching the train went past a few times, we then visited Pororo's home which both the kids and adults can enter to take a few photos. The home is built in rather small, so parents would need to bend over to enter the premise.

Next, we proceed to the toddler's area where younger kids can segregate their playing area with the older kids by playing cooking, slide and piano activities. 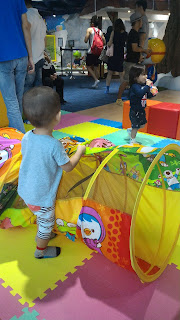 Every indoor playground seems to have a ball pool area for kids to throw and drown their frustration away and this is no different. The pool area was not segregated for the toddlers (unlike many other places) so you have many older kids who jumped around and it can be pretty dangerous to leave our younger one alone. The shark in the middle of the area was also a target for many kids to throw the ball into so you have many cannon balls around that area.


There was also some more time on a engaging on arts and crafts activities like drawing, coloring and brick-ing as we wait along for the musical schedule in the afternoon. This is the same premise they use for birthday parties but as there are no activities on that day, the place is open to the public.


One of the highlight of the playground is the Pororo's live musical theatre where kids get to interact and sing along with Pororo and friends. There are several schedule within the day so make sure you plan ahead to catch the show. The show lasted for about 20 minutes.


Lastly before we left, we had one more round of energy to climb across the 3 storey high playing area for a couple of minutes before we decide to leave for the day.


Overall, it was a very outing to the park. I like the park layout in the sense that they are huge and caters to different playing area for the kids. We didn't visit the café area but felt that it could be spaced smaller as it takes up quite a bit of the area. Perhaps, that is one of their main revenue driver so they needed that space.
For admission, please make sure that you bring your credit cards partner with either POSB, DBS or OCBC to get the slightly cheaper rates than the non-member. The price for the non-member can get a bit expensive there but I think most would qualify under the Partners rate. If you are interested to visit the park pretty often, you can consider to get their annual membership for a much cheaper rate.