The Angry Bird Theme Park is something which caught our eyes on when we heard the reviews.

Not far away located at Komtar JBCC (just beside Citysquare mall), we proceeded to go there from Singapore via the Woodland customs and soon we've arrived at location just within an hour.


We happened to wear the same family shirt which we bought in Hua Hin.

The place is huge and it was divided into several sections.

The slides was extremely popular because it appears that it was the only slides for the toddlers while they have a much bigger slides for the slightly more adult kids. A pity we were not able to play that yet at this point due to his young age.

There is also a small cave Cinemine which they are playing the Angry Bird video inside. A couple of kids are glued right to the screen watching them. Typical small children :)

Just beside the Cinemine, there is also activities for the young for creativity to assemble and disassemble the soft yet firm handles. A lot of kids are bashing one another with this so do caution and watch out for running kids.


After a few while, we changed and proceeded to the Bike Lagoon area where there are ample of space for kids to try onto the bicycle where they can learn and fall safely, under the supervision of the parents. It was fun because Oscar has never really tried on moving around with a bicycle so it was a totally new experience for him.

For the more experienced, there was also challenges like the slope below which we attempted but fall. Oh well.

Moving next, we saw a field where kids were running around playing football. Intrigued by a moving ball, Oscar went in to play together with the kids. It was mostly just chasing around because the older kids were much faster and experience. Poor boy, he became he running monkey that day.

One of the highlight of the theme park is the Go Kart where kids can ride onto a kart and move around the premise competing with one another.

We had to queue this for about 20 minutes and upon our turn when our names are called, we were excited and raring to go. A pity towards the ride that Oscar refused to ride with us because it would have been fun. Urghh, at the end we had to give it a miss.

The other highlight of the theme park was a huge trampoline space where kids can jump and bounce around the area. We enjoyed spending our time here the most because it's an area where the kid can roam around playing with the other kids.

You can also see how my wife was attempting to balance herself like an expert but failed miserably. Not qualified of course... Tetttt :) 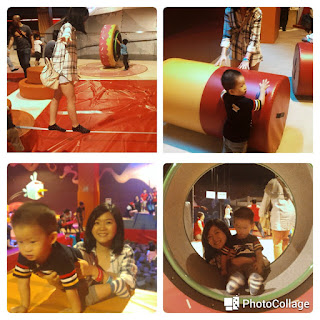 Overall, it was a very fun theme park compared across the others we've been to.

The theme park would be best suited for young children at the age of above 5 but below 12 as there are more activities that they can play.

Please also note that the theme park charges not per children like what we are used to in Singapore but by per accompanying adults. Child below the age of 2 gets in for free.