A Fun Day At The Zoo

It's been raining for the past couple of days so we are praying the weather will be good when we get to the zoo. Thankfully, the weather was accommodating so the walk was not as hot as we expected it to be.

This was our second visit to the zoo since we went a few years ago when Oscar was only 1 year old. This time though, we brought along the grandparents since they've never visited the Singapore zoo.


After a few meters walk inside, we'd quickly found the engulfing polar bear on our right hand corner. The polar bear was mesmerizing as it was swimming in a pool of cooling water. I bet he too can't stand the heat we have right here on our tiny island. 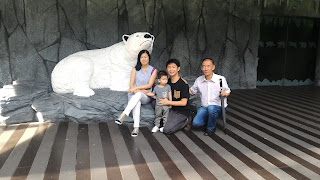 Right at the heart of the zoo is the Orang Utan area where you can see monkeys and genetically similar species jumping around the tree in an open area. It was a very scenic view and one of my personal favorites because you can feel the natural scenery of our living habitat. It was fun looking at them just as much as they are looking at us. Hmm.

We walked past a few other animals such as the Rhinoceros and the babisaurs but didn't manage to capture a moment. Nevertheless, we managed to get a good view of the cheetah as it was lurking through right in front of us back and forth as it appears hungry. I guess, it gotta wait for feeding time!!!

We managed to get a nice close shoot up of the giraffe this time round as they seemed busy eating the leaves. One of our best memories of giraffe was the zoo in Bangkok where there are literally hundreds and thousands of giraffe lining up in front of us. That was an incredible sight.

We watched two shows during the day. One is by the amphitheatre where the splash shows are showing sealion. The shows are the earliest at 10.30 am, so everyone was rushing almost for the same seat. Still, since it was a weekday, there were plenty of seats around so no worries on getting no seat. The shows last for about 30 min and it was pretty entertaining and the crowd was enjoying themselves.


All in all, I think a good day outing for the family. We went right in the morning at 9am when the gate opens and we finished just about at 1pm since Oscar was already in sleepy mode so we decide to get back early. Since it's also not our first visit, we are also more familiarize with the place itself.

Until then again next time maybe after our second kid is born next year!!

It's been a while since I last updated this blog when we went for a holiday in Krabi in July. Things moved so fast that there are hardly anytime to breathe these days.

In any case, our activities have been as plentiful nevertheless as it was in the past and I have a lot of backlog to update on this blog. I've finally managed to push myself to upload the picture into the blog today.

We went to the Citysquare mall this afternoon as part of our weekly adventure to find something new to explore. After we had our lunch, I brought my son to the Fun & Laughter indoor playground located at groundfloor B2. This was the 2nd time we had explored the playground.

The playground itself isn't huge by any means but they had well concentrated areas that attracted kids to the place.

As we enter, we were immediately greeted by a spacious free and easy area where there are buses and cars for kids to ride along. The Tayo bus was popular because it was obviously the kids' favorite as they grew up watching the cartoon. For Oscar, he extremely loves anything that has to do with buses so there was no doubt he was going to catch it first.

Beside the playing area, there was a ball filled area where kids usually like to slide and drown themselves in the pool.

There was also a shooting area by the top where kids can pit their skills against one another by putting the ball into the machine and shooting to score points. For the younger kids, they can still participate as the management has kindly put a small ladder across where kids can climb and reach the shooting gun. That really helps a lot!!!


On the other side, there was a small room where kids can gather to play the games that was being screened from the projector. Most of the games include stepping on the monster or bubbles that allow kids to move and jump around so it can get crowded at times.

The highlight of the playground is the gym activities area and the huge long deep slides which kids (and myself) thoroughly enjoy playing it over and over again. The area itself wasn't big but it is enough for parents to get really tired chasing their kids one after another.


Overall, it was a good decent playground with very reasonable fees.

The playground is catered more towards the slightly older kids as the mall has another one which catered for the younger kids (more on this next time).

If the kid is enjoying it, why would the adults complaint? :)