We woke up early in the morning to the magnificent sun rise, awaiting for the sky to brighten.

The weather at the peak was in single low degrees and it was extremely chilling in the morning.


We had a quick shower before heading down for breakfast at the minsu, which was personally served by the owner herself.

It was a nice simple dishes of home made porridge with a few condiments to add to the taste. Really good when the weather is so cold.


After breakfast, we packed our bags, bid farewell to the owner and left Cingjing to head to the peak of the mountain.

Wu Ling is a designated area which is an altitude 3275 meters above the ground level. It was snowing out there but the view was nothing short of amazing. From the Taiwan national geography, this is by far the best stop to take a scenic view of the peak mountain in Taiwan area.

We also headed to Hehuanshan which was on our way enroute to Hualien for the night.

From the peak, we made our way down passing by the Taroko Gorge backdrop enroute to Hualien.

We've heard about the horrendous turns that made many passengers road sick and we experienced it first hand.

Both our kids threw up and were feeling very uncomfortable with the challenging journey and we had to stop a couple of times to take a breather. During all our trips, this is by far the most challenging and lengthy road trip that we've experienced.

Tips: Don't eat too full during the road trip and try to sleep on the enroute down from the mountain.

Our last stop after we reached the ground was to stop by the 七星海 beach which is my personal favorite from all the attractions that we've visited.

The beach is made up of all stones without sands and the kids were having a very fun time stacking up stones after stones to see who can top the highest.

We booked our stay at Hualien at the Ing B&B, which I found it personally on the website and I thought it was a great find. Not only was the minsu huge (including really huge bathroom) but it is also clean, quiet, and also have plenty of board games and toys to occupy the kids.

The complimentary breakfast, which we had in exchange for the voucher, was also really delicious.

I think we've got addicted to minsu while here in Taiwan so far.

After resting about an hour, we proceed to go to the nearby Dongdamen night market (which is about 15 minutes drive) for dinner and supper.

As usual, we try to venture into the recommendation and after about 2 to 3 bites of different foods, we are filled up and became a happy person.

The night market is huge, and we get our poison filled up. 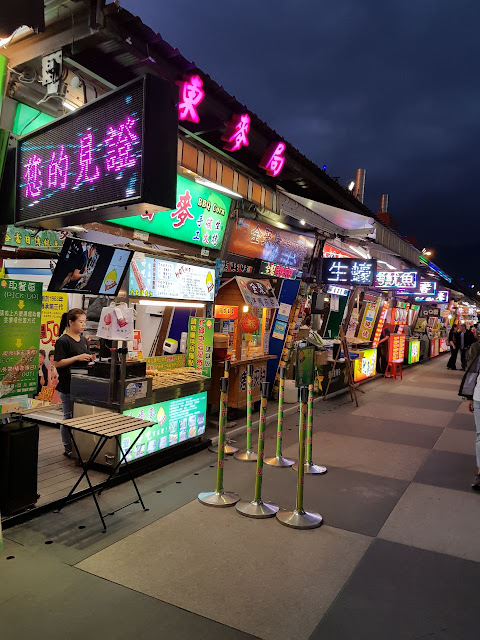