I went to try out with a couple of my colleagues the escape room called the "Lost SG".

This was my second try after having my first try last time at U-Escape at the Plaza Singapura.

Lost SG prides itself as a high-tech escape room where players have to put their thinking cap in trying to solve thought provoking puzzles and race against time in order to escape from the room. There are many different hurdles along the way which we stumbled upon and various clues are available. 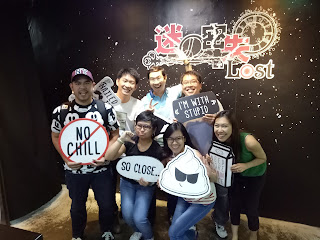 The room that we chose was the Aokigahara which has a 6 star difficulty level (most difficult).

Aokigahara is a well known forest on the northwestern flank of Japan's Mount Fuji thriving on 30 square kilometers of hardened lava. In the past couple of decades, there has been many stories of suicide cases and the death toll has since not been announced since 2011 because of the rising trend.

We expected the room to be scary and dark.

Without going into specific details in order not to spoil the fun for anyone who wanted to try, I thought the room was well decorated, and gave a nice spooky feeling when we entered inside. There were 7 of us, but we were only given 3 torchlights to navigate around the room.

There were many puzzles and riddles that we need to solve from one area before we can proceed to the next. Some of the puzzles required logical thinking while there are some technology involved which was pretty impressive.

We stumbled upon on a few puzzles which we unable to solve so we called for help a couple of times.

There was also one section where physical movement might be required so you definitely need to be a little mobile on the go.

A big portion of the puzzles was based on horoscope and animals reading, so logical thinking is required. Mathematical ability is not so much tested in this escape room.

Overall, it was a pleasant friday night activity that we enjoy on solving challenges. The 1 hour time given pass very fast and before we know it, time is already running out.

We managed to escape from the room at a time of 1 hour and 5 min though and were proud of our efforts. 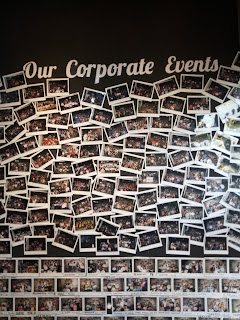