The Wonderful World Disney On Ice 2017

Disney on Ice has been on our radar for quite a while.

My elder son has been rather hooked on Disney recently because of the sticker book his mum bought for him so I thought it's a good chance to introduce Mickey and the rest of his troops live on show. 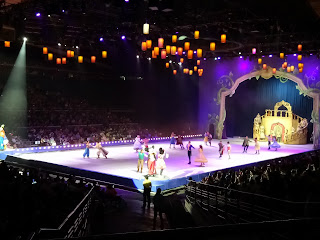 We chose the category 3 where the ticket price was $45 and the scene was pretty clear to see from our seat. There were many empty seats around our area despite a Saturday and once the show started there were people who moved over from category 4 to 3 to get a better view. That's a pretty good idea for next year when we have our big family group coming together.

The show started promptly right at the dot on our chosen time at 10.30 and we managed to find our seats pretty easily. 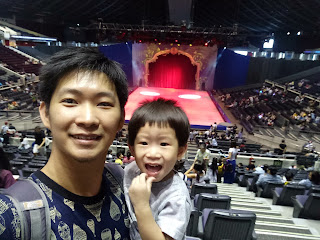 To be frank, my knowledge of Disney was rather limited.

I haven't seen a Disney movie in about 5 years and I have lost touch with the rest of the recent movies like Frozen and Rapunzel for instance.

My old generation of Disney were Mickey and gang, which includes Aladdin and Snow White. There were totally different generation gap between me and my son knowledge of Disney characters.

The first half was more exciting to us because there were more characters that we could recognize, while the second half was more focused towards the Princesses like Rapunzel and Anna and Elsa which we have no idea on the storyline and characters. It was the most popular though as I can see from the crowd action when they played the song "Let it go"

Overall, I think it's worth the ticket and I'm happy that Oscar enjoyed the show throughout overall.

I hope they'll come back again next year and we'll go together as a big family this time round :D